The golden rule – What are we allowed to do?

“One should treat others as one would like others to treat oneself” and “What you wish upon others, you wish upon yourself”. As wise as this golden rule may appear at first sight, I always had my problems with this council. If I treat you as I would like to be treated, I presume that you and me are equal. That we wish for the same treatment, have the same needs and that our perceptions don’t differ. 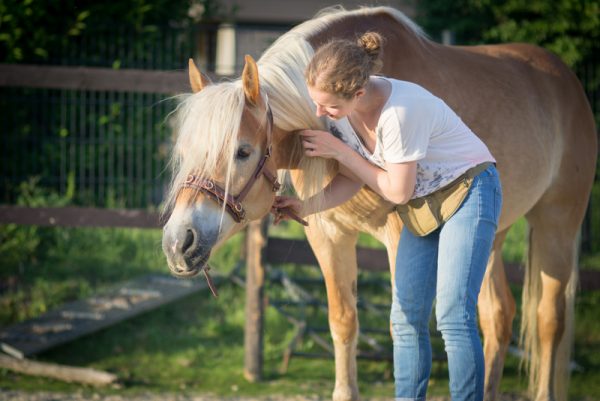 I presume that you are like me – instead of asking who you really are.

Maybe I talk loudly and lough resounding while you feel overwhelmed by the noise. Or I hug you while you would prefer a little more space between us. It must feel similar for our horses when we hypothesize about them. When we are convinced to know what they need, what they want and believe to know them even before we met them once as individuals. With openness and acceptance and a honest look for details.

Maybe we don’t treat horses as we would like to be treated ourselves. We would not want to carry somebody around, maybe except sleeping babys. We don’t like to run around in circles when it is hot and dusty outside and the flies won’t let go of us. We don’t want to have every tiny mistake corrected. And even if we do want some of this or have to do it anyway, we appreciate to be in charge of the smaller and bigger details where we can influence what happens to us.

We let ourselves be guided by belief systems and habits that are older than ourselves. We let them block our clear sight, not because they are wrong, but because they neither stem from us nor from our horses.

We could ask what we are allowed to do with horses. But which answer to this question is of value, which one does contribute to the well-being of the horse? It can only be the honest answer of the horse itself. And our appreciation of it.

I can ask my question ten horsepeople and I’ll get ten different answers. They will tell me their opinions based on their experiences and theories. Maybe their answer would even be based on what their horses told them. But even in this best case scenario it could still be the opposite of what MY horse actually needs.

There is an unbelievable value in the attempt to treat others like they want to be treated.

If we base our actions on the honest intent to see the core of our counterpart and its reactions. This attempt opens a door to appreciation and mutual thoughtfulness.